Blintzes and cheese cakes aside, is there a culinary creation that has true symbolic meaning for Shavuot? When my friend, Rabbi Lee Diamond, recently asked me if I ever heard of a Shavuot custom from Tripoli that entailed baking a Challah type bread called Los Siete Cielos, I knew he was on to something.

We began googling. First of all, the meaning of Los Siete Cielos is The Seven Heavens. Lee searched the source for רקיע שביעי ( he found it -- Talmud Hagiga 12 : עמוד ב). I looked for the meaning behind the bread.

Here's what I found: To begin with, this is not a custom exclusive to Libyan Jews. It's a Sephardi custom also practiced among Jews from Greece, Turkey and parts of Morocco. This seven "layered" challah represents the seven celestial spheres that opened up when God gave Moses the Torah on Mount Sinai. Alternatively, they could stand for the seven spheres Moses had to go up in order to reach God. In fact, while researching this custom, Lee found that some Challot had ladders for climbing. Have a close look at the photo that I found. Yup. That's a ladder on the side.

I don't know about you, but I wouldn't even attempt a recipe for this challah. It looks far too intricate for me. But if we're into baking traditions for Shavuot, I discovered another custom -- Sinai Cake. While this goodie also seems to have Sephardi origins, I found an easy (Askenazi?) recipe at ChallahCrumbs.com

Add a little lightning and two graham cracker "tablets", and you're good to go. 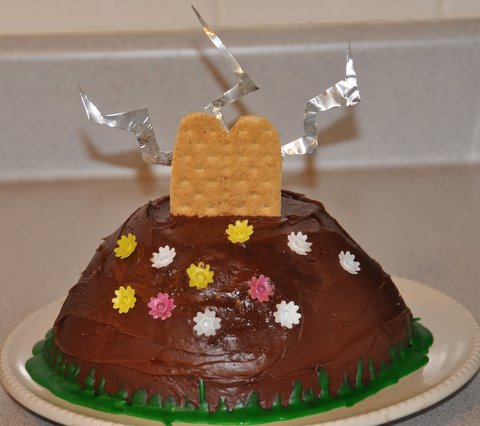 Symbolic yumminess.  I love it. Enjoy!!!!

More in this category: « Carob Fruit for Lag B'Omer! And You Thought It Was Only for Tu B'Shvat. Subscribe to "Shabbat Around the World" and Get a Free Copy of "My Very Own Jewish Calendar" »
back to top