You are here:Home>blogs>Jewish Holiday Customs>Sukkot's Social Networking Message Coupled with Traditional Bukharan and Moroccan Customs are a Perfect Fit for the 21st Century
Sunday, 05 October 2014 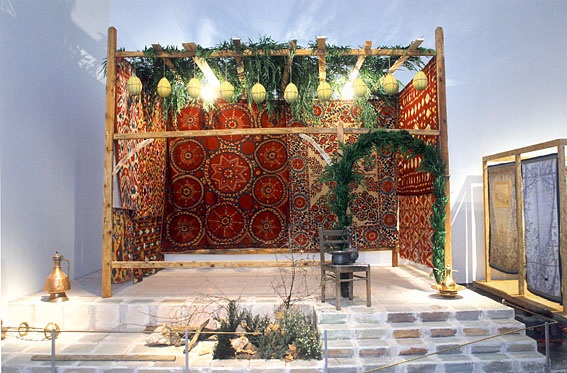 Do you know that Sukkoth is the original blueprint for social networking and an opportunity to join a group?

While the first description of Sukkah living is found in the Book of Leviticus, it's the interpretations of of the holiday by Jewish sages centuries later on that provided it with a foundation for social outreach.

First came Maimonides – one of the most revered philosophers in Jewish history – who admonished those comfortably sitting in their own dwellings, surrounded only by family. In Maimonides' eyes this was tantamount to feeding the stomach not the soul. He wanted Jews to reach out by inviting the poor to join in a meal.

In the 16th century the Kabbalists stepped in, establishing a Sukkoth custom based on the teachings of the Zohar. Truth is, they developed one of the first virtual experiences by telling their followers to invite a different exalted guest from the Bible to their Sukkah each night. The first night, Abraham, the second night Isaac, the third night, Jacob, followed by Joseph, then Moses, Aaron and David. They called this tradition Ushpizin (inviting guests) – a custom solely associated with Sukkoth until this day.

But what if you don't want to invite a Biblical celeb? What if you want to give this tradition a more relevant meaning? Let's do it by connecting two unusual Sukkoth customs – one from Bukhara (Uzbekistan), the second from Morocco.

Bukharan Jews believe that if a Sukkah is going to be their temporary home for 7 days, then they should make it as cozy and aesthetically pleasing as possible. They cover the Sukkah floor with rugs and soft pillows instead of chairs. The walls are decorated with colorful silks and fabrics – you might say, temporary wallpaper. Meanwhile, the entrance is adorned by an arch made out of willow branches, and instead of hanging chandeliers, the “ceiling” has suspended bunches of grapes, apples, pomegranates, pears and a mixture of mint, basil stems and all kinds of herbs. What an intoxicating aroma! Who needs Glade air spray?

Combine this very appealing “home” with the Moroccan custom of inviting a different poor person into the sukkah every night. Moroccan Jews take Maimonides seriously by pushing the envelope even further. They make their guest feel like a king or queen, placing him/her at the head of the table and then serving a lavish feast.

Can you think of a kinder way to celebrate Sukkoth? Today, when so many fellow Jews are suffering economically, this is your opportunity to reach out and show them that you care. And if you're wondering about the origins of this important Jewish principle, take a look at Genesis, chapter 18. Abraham rushes from his tent to greet three strangers, initiating the Jewish value of welcoming guests/strangers into your midst.

More in this category: « Yom Kippur Prayer for Environmental Protection: This Shmita Year, May the Land Be Inscribed in the Book of Life Celebrate Simhat Torah by Leading a Hakafa Carrying Your Baby Instead of a Torah Scroll. All You Have to Do is Follow this Yemenite Custom. »
back to top